They say that for a business to flourish, it should offer a unique product or service. Stiff competition will determine the successful one. But if your business is truly one of a kind, there will be less competitors and a bigger opportunity for success.

Filipino couple Alexis and Shiela Dela Cuesta have waited for a baby for quite a long time. So, when their daughter, Deborah, came, they wanted to make her first birthday party special.

Shiela found out that her daughter’s name means ‘bee’ in Hebrew, so they planned a bee-themed celebration for her first birthday. 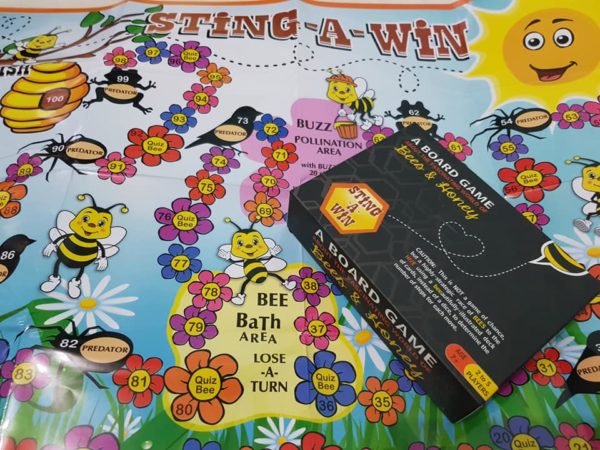 Alexis took charge of entertainment aspect of the party. He came up with an activity he called “Sting A Win”. It was inspired by the card game Exploding Kittens and the board game, Snakes and Ladders. The game was printed on two life-sized tarpaulins so guests can play while the party was ongoing.

Party guests encourage the couple to make it an official board game. As a result, Alexis and Shiela ran a few playtests to check the game for any bugs and design flaws. Afterwards, they decided to self-publish their game, ‘Sting A Win’.

Alexis explains that Sting A Win is just Snakes and Ladders in the sense that it is filled with obstacles such as spiders, frogs, and birds, which are predators to bees, in real life.

“The first player to reach the hive wins,” Alexis explains.

But, instead of rolling the dice, players use cards to move around. If the token bee lands on any of the predator, the player will ‘die’. But, it a ‘Sting’ card can keep a player alive in the game. However, it can only be used once.

The board game also has Quiz Bee cards that contain facts and trivia about bees. When a player successfully answers a question, he or she will earn a ‘nectar’. Once a player accumulates 1,000 nectars, he or she will win the game.

The game was received well by the beekeeping community and are available in different bee farms in the Philippines. Furthermore, it is also being sold in other countries such as Singapore, United Kingdom, Australia, and Venezuela.

“We consider it a God-given idea, as we have been praying for business we could start to augment our income,” Alexis explains.