If you think your Meralco bill from March to May is high, wait until you see your June bill.

The Manila Electric Co. (Meralco) advised its customer that the electricity bill that they will receive for June will be higher than the previous bills they received

Meralco Spokesperson Joe R. Zaldarriaga said that the June bill will reflect the actual electricity consumption for four months—March, April, May, and June. He said that this bill will be higher in comparison to the usual monthly bill. 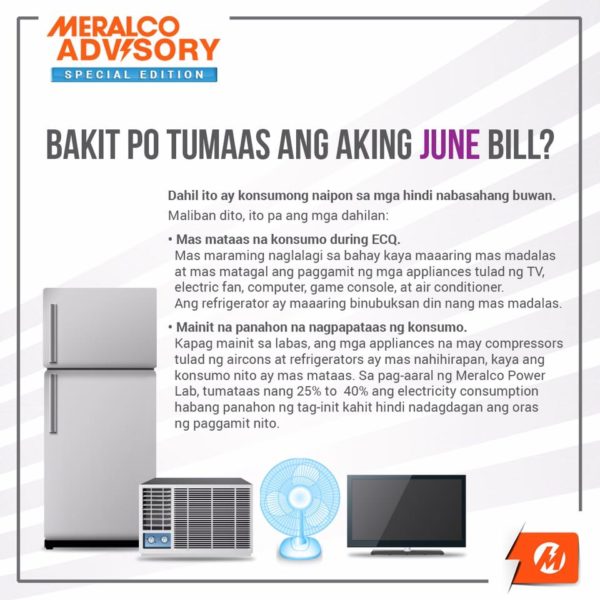 Meanwhile, Meralco said that customers can settle their unpaid Meralco bill for the lockdown period in monthly installments, following the order of the Energy Regulatory Commission.

According to the advisory, power utilities should allow their customers who consumed 200 kilowatt-hours (kWh) and below to settle their unpaid bills in six monthly installments. On the other hand, those who consumed above 200 kWh can pay their three-month bill in four installments.

Because of this, customers will receive two different bills from Meralco. The installment charges will be billed separately. It will be due for payment every 15th day of the month.  The customer will receive another bill for his regular monthly consumption. This bill should is payable on or before the last day of the month.

Meralco explained that the lower demand for electricity during the enhanced community quarantine period resulted in a lower generation charge passed to the customers. Moreover, Meralco suspended the guaranteed minimum billing demand for business customers, as aid measure. 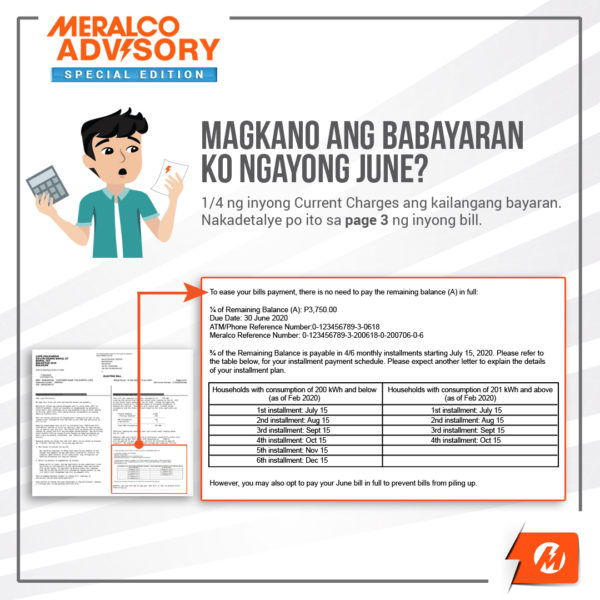 For the June bill, the power company will not collect a universal charge that covers the environmental cost of P0.0025 per kWh from their customers