Did you know that Louis Vuitton and Hermès source out the crocodile leather they use in their luxury goods from a farm in the Philippines?

Aside from being the founder and chairman emeritus of one of the leading home improvement retailer brands in the Philippines, William T. Belo runs a crocodile farm that supplies leather to luxury brands like Louis Vuitton and Hermès. 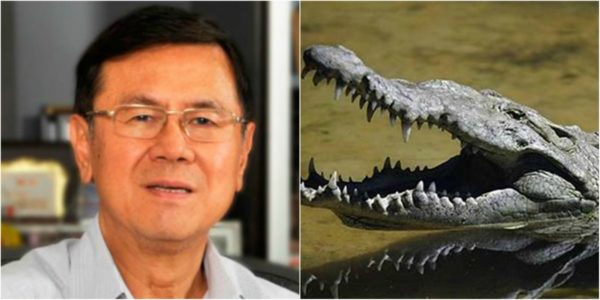 Belo, the man behind Wilcon Depot, decided to try his hand in another kind of product when the 1997 Asian Finacial Crisis hit his business. Since he was already providing materials to build shelter, Belo thought of venturing into farming business.

In his interview with GoNegosyo in 2016, Belo said: “The basic needs of a person are food, shelter, and, of course, clothing. As I already started in shelter, I felt I should go into something else. This time I started with a farm.”

Initially, his started out as a layer farm that produced chicken eggs. But during the time when they needed to dispose 200 malnourished chickens, which could no longer lay eggs, they started breeding crocodiles that served as disposal system.

Eventually, the farm intended to produce eggs shifted to crocodile breeding. They began making products from crocodile meat like sisig, burger patties, steak  and sausages. But Belo’s crocodile farm business took it to the next level when it began supplying skin.

With the help of a Japanese business partner, they were able to supply around 4,000 crocodile skins annually to designer brands like  Louis Vuitton and Hermès. These designer brands are known for producing exotic crocodile leather goods.

“When Hermès saw our skin, they got interested,”Belo told ABS-CBN News.

Just like Wilcon Depot, managing the crocodile farm required patience. In fact, it took years before their products became ready to enter the commercial market.

Currently, Belo has 20,000 crocodiles in his breeding farm.