One night in March 2014, Heidie, who had just given birth to her baby at that time, realized that an amount of P3,000 was stolen from her wallet. It was only when she was about to pay for her baby’s diaper and milk that she realized she was robbed. 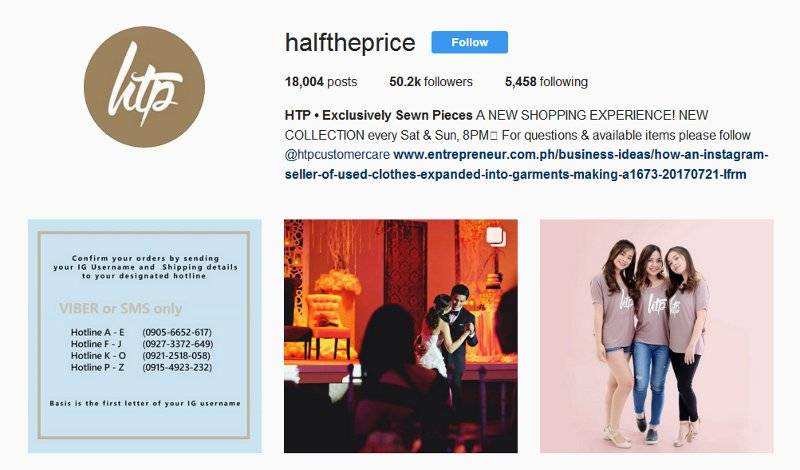 Determined to replace her lost money, Heidie began rummaging through her pile of used clothes she hadn’t worn for the past few months. She then decided to take photos of her wearing the used clothes and posted it on an Instagram account with username @halftheprice. To inform her friends that she has a shop, she also shared the link of the account on her Facebook page.

When she woke up the next day, Heidie was surprised to find dozens of messages in Viber. In less than a day, all her clothes were sold out and Heidie earned P8,000, which is more than double of what she lost the night before.

But Heidie didn’t stop after she achieved her initial goal. After some of her friends encouraged her to sell other items from her closet, Heidie continued selling her used clothes at half of their original price.

She made the shopping experience for her followers more exciting by letting the first person to comment “mine” on the item actually purchase it. At that time, Heidie was already earning P1,500 every week.

When Heidie decided to sell celebrities’ used garments, her IG shop amassed followers as well as revenues. Items from Janine Tugonon, Lara Quigaman, Chynna Ortaleza, Desiree del Valle as well as Boom Labrusca were sold for not more than P300.

Seeing that she might eventually run out of preloved clothes, Heidie took the opportunity to partner with local seamstresses in Angono, Rizal to explore garments making.

With the success of her business, Heidie decided to give up her full-time job to focus on her growing business.

Currently, HTP has nearly 50,000 followers and 18 marketing and support employees based in their hub in Balagtas, Bulacan. The business has about 40 seamstresses including subcontractors.

HTP produces a maximum of 3,500 pieces of ready-to-wear clothes per month, priced at not more than P500. These items get sold out almost immediately.

“[Our profits hit] around Php20,000 to Php30,000 a month [minus the production costs and administrative expenses]. But we don’t feel that yet because we are always keen on expanding,” Heidie said.

As for future plan’s for her brand, Heidie revealed that she doesn’t intend to put up a physical store for HTP. Instead, she wants to invest on a website outside the IG platform.