In a vlog by food vlogger Manuel Olazo on Youtube, he goes and tries this trending fried chicken and finds out the secret to why it’s such a big hit. Near Robinsons Manila, you’ll find the kanto fried chicken stall of Kuya Ronnie. At any time of the day, you’ll always find a long line of people waiting to have their piece of fried chicken and rice.

Kuya Ronnie explains that he sells affordable meals to those who don’t have much. He recognizes that many people are struggling financially and that providing them with good fried chicken at a reasonable cost is important.

“Pang-masa lang ito. Dahil alam ko maraming tao na naghihirap ngayon eh, kaya mura lang pagbebenta ko,” he explained. [This is for the masses because I know there are many people who are struggling today. That’s the reason why I sell it at a low price.]

In a business mindset, it also makes selling goods quicker and easier. He said, “Para mabilis lang din.” [So it’ll also make selling quicker.] He sells a fried chicken meal with rice for P50 and P40 with no rice. He also has fried porkchop at P60 with rice. He also has veggies for P20.

Kuya Ronnie begins frying in his stall around 10 a.m., and by 1 p.m., all of his products have been sold out. That’s 200 pieces of chicken and 60 porkchops sold in just a few hours!

Aside from making it affordable, Kuya Ronnie is also proud of his products because his fried chicken are not all breading. They are also cut into large portions that will satisfy any hungry worker. Even in street foods, giving good quality products are still very important to keep your business going. This was the top advice of Maricar Reyes-Poon when it comes to handling a food business.

Many successful business owners have proven and tested Kuya Ronnie’s mindset of keeping pricing low to gain more customers and sell faster. For example, the owner of a popular ‘bodega’ grocery shares the same mindset of maintaining a low profit to keep customers coming back.

You can watch the video of Manuel Olazo via Youtube channel: 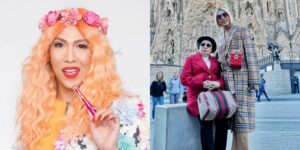