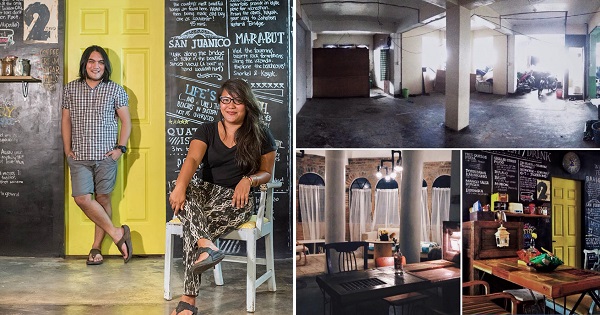 Having been part of the Global Xchange program for two separate years, siblings Jacques and Lucia Palami had experience as volunteers in the Philippines as well as in the UK.

The two also love to travel; though they rarely had the chance to travel together. They had always joked about building a hostel somewhere but had no idea that this would be in Tacloban, especially considering that they had both spent more than 10 years in Manila.

The opportunity came after Supertyphoon Yolanda hit the Philippines, causing much damage especially in Samar and Leyte.

Jacques and Lucia quickly volunteered to help, going to the affected areas as fast as they could manage.

But like many volunteers at the time, the siblings had difficulties finding a safe and comfortable place to stay. Distraught families were still looking for missing members; and many homes have been damaged.

To help, Jacques drove a ‘truck’ bar around Tacloban to provide cold drinks to the locals as well as the volunteers exhausted in the rescue and retrieval operations. At the time, the city still had no power.

It was one night when they parked in front of an abandoned building for rent that Jacques had the idea of opening a hostel. He called up Lucia who readily agreed with his idea.

Starting a hostel immediately post-‘Yolanda’ was a huge challenge for the two, especially because everyone else is busy rebuilding their homes and business establishments. The prices of building materials were sky-high but the two received help from their siblings – after all, these two were the youngest of 16 siblings! They had all the help they could get from their ates and kuyas.

Using upcycled wood and materials from items saved from the typhoon’s debris, the siblings turned the abandoned building on the corner of Burgos and Juan Luna Streets into a bright, homey abode they called Yellow Doors Hostel.

It provided a home for the many volunteers in the area and also became a social project for the siblings.

They experienced a lot of roadblocks, especially because they didn’t know anything about running a hostel but the two would quickly learn.

It did help that they had no competition in the area; thus,the hostel was easier to find on Google search, providing them a steady stream of clients.

The two are also very ‘hands on’, personally seeing to the hostel’s daily activities. They also coordinate with the community to help ‘fill a need’. This would soon mean collaborating with local officials for programs and activities either hosted or sponsored by the hostel.

Profit might not be large for this small-scale business but the two manage to get by, even sharing their profits with the community.

It was a “see-a-need-fill-a-need” type of situation but there’s no turning back for the siblings – and they are actually satisfied with how their business is growing and also helping the community get back on its feet.