Business truly knows no age. An entrepreneur at the age of 74, a grandmother from Davao City has found a new chapter in her life as she becomes an entrepreneur. Even better, her business is so successful that she’s earning over P50,000 to P80,000 in just a week.

Get to know Vita Avanceña, the grandmother behind Davao’s popular Lola Vita Donuts. She shared how her donut business began and how she’s been able to manage it. Lola Vita recalled that during the height of the pandemic in 2020, she found herself getting bored and doing nothing. Cooking became her past time until many of her family encouraged her to sell her donuts.

From a capital of P5,000, Lola Vita is now earning over P80,000 a week and even bigger when they join food bazaars. The secret to their success is not just hard work but also good quality. Lola Vita offers unique but also delicious flavors such as double cheese, quadruple cheese, kapeng barako, tsokolate and dulce de leche.

Whether you’re young or already in your golden years, you still have the potential to be a successful entrepreneurs. Another inspiring story is that of Julie Gandionco, who started Julie’s Bakeshop at 50 years old.

How To Make Champorado Tuyo Donut

First, make a dough by combining the basic ingredients of flour, butter, eggs, sugar, yeast, water, etc. Knead until you form a soft dough. Let it rest before portioning it into small donut-sized pieces.
Then, you can start frying your donut over oil.

Next, you’ll prepare the champorado which will serve as your donut topping. In a sauce pan, melt chocolate and whipped cream together over low fire. Once you have a thick chocolate sauce, set aside to cool. Once ready, you can start adding in the rice crispies.

Now, you can start assembling your donuts. Fill the donut with cream filling and top it with champorado. Then, garnish it with tuyo flakes and drizzle with cream cheese sauce. Serve and enjouy!

You can watch the video from GMA via Youtube channel: 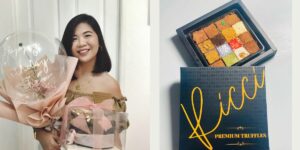