The Bangko Sentral ng Pilipinas has recently launched a set of enhanced banknotes under the New Generation Currency (NGC) series, with an improved design and additional security features that aim to protect the integrity of the Philippine currency and are more responsive to the needs of the elderly and the visually impaired.

“To further promote inclusivity and integrity in our currency, the BSP also took an opportunity to further improve our banknotes as part of global best practices and, at the same time, improve on its design and security features,” said BSP Governor Benjamin E. Diokno.

As such, the enhanced NGC banknotes are embedded with tactile marks in the form of intaglio-printed pairs of short horizontal lines. 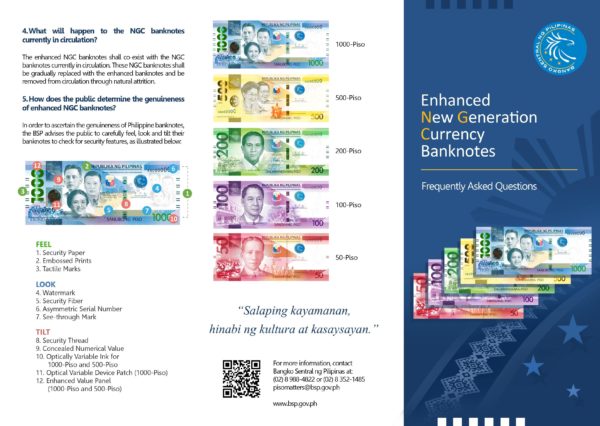 The BSP also showcased the rich culture of the Philippines by using the designs of several indigenous weaves of the country on the banknotes’ windowed security thread (WST).

The 1000-Piso carries the T’nalak weave design, with movements of patterns, color, and micro-optic features.

On the other hand, the 500-Piso adopted weave design from the southern Philippines with three-dimensional and holographic features. The color of the security thread shifts from gold to jade, and vice versa.

Meanwhile, the 200-Piso’s security thread carries an indigenous textile design handcrafted in Visayas. Also with three-dimensional and holographic features, it has a color that shifts from green to blue, and vice versa.

Lastly, the 100-Piso has an indigenous textile design from the Bicol Region and colors that shift from violet to bronze and vice versa. 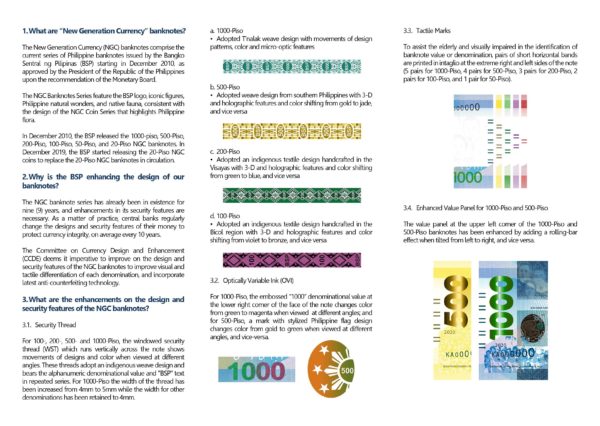 The value panel at the upper left corner of the 1000-Piso and 500-Piso banknotes were also enhanced with a rolling bar effect when tilted from left to right, and vice versa.

The NGC banknotes released in 2010 shall remain legal tender and will co-exist with the enhanced ones.