Home » News » First Ever Subway Project in the Philippines, Not Forgotten Amidst Pandemic

Despite the health crisis facing the nation today, the Metro Manila Subway Project, the first Manila subway is still pushing through.

“No COVID-19 can hinder or block us in making sure this dream will come true,” Department of Transportation Secretary Arturo Tugade said during the unveiling of the Japan-made tunnel boring machines (TBM) in a virtual demonstration with the manufacturers, live from Tokyo, Japan.

Tugade added that this was an ‘early Christmas gift’ for the Filipinos, who may have thought that the subway project will not push through anymore because of the pandemic. 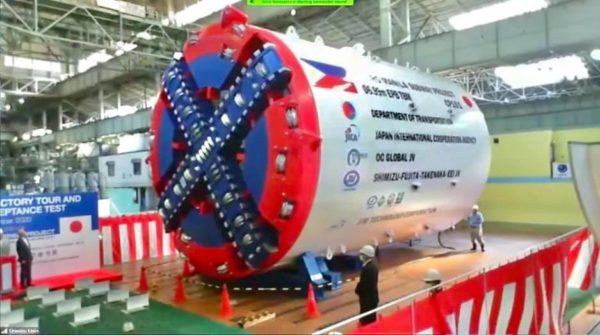 “They are now surprised to see that the first Manila subway is not forgotten, and in fact, we continue to work and labor together with our Japanese partners, amid the pandemic,” he added.

The TBMs, each measuring 6.99 meters in diameter and 95 meters in length, will be used to dig underground and lay the tunnels for the 34-kilometer project that will span from Barangay Ugong in Valenzuela up to Ninoy Aquino International Airport in Pasay City.

Weighing 700-ton, the first of the six TBMs from Japan will be shipped to the country in January 2021.

According to Transportation Undersecretary for Railways Timothy John Batan, each of these gigantic machines can lay down up to 12 meters of tunnel segments per day, and excavate daily up to 600 cubic meters of soil.

The Metro Manila Subway is expected to commence partial operations in 2022 and will be fully operational by 2026. It will interconnect with LRT-2 at Anonas Station; with the North-South Commuter Railway at Senate, FTI, and Bicutan Stations; and with LRT-1 and MRT-7 at the Common Station.

The subway is expected to serve 370,000 passengers daily in its first year of full operations. Its design capacity can accommodate up to 1.5 million passengers per day.