The Anti Red Tape Authority (ARTA) declares the automatic approval of all telecommunications towers’ pending applications for government permits and transactions which are already beyond seven days.

ARTA Director-General Jeremiah Belgica said that the Sanggunian or Council approval should no longer be necessary under the new Joint Memorandum Circular. However, he added that ARTA automatically approves previous applications that have not been acted upon within 20 days, by operation of law.

Meanwhile, officials who fail to comply will face charges, according to Belgica. 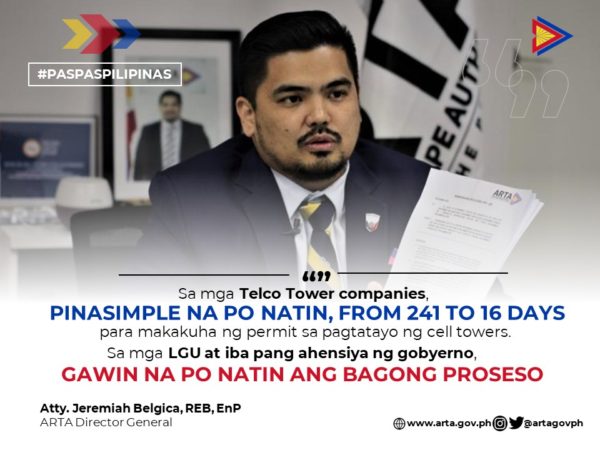 In an earlier meeting with telcos and tower companies, Belgica asked the said firms to submit to the ARTA and the Department of Interior and Local Government a list of all their pending application with local government units (LGUs) and national government agencies (NGAs).

He added that those who have pending applications with complete submission shall be automatically approved.

ARTA has been implementing measures to ensure the ease of doing business in the country by streamlining government processes and mandating agencies to comply.

Last month, ARTA and the Department of Information and Communication Technology (DICT) led the signing of Joint Memorandum Circular (JMC) No. 01-2020 which drastically streamlines the permitting process for the construction of telco towers.

Other government agencies who signed the JMC include DILG, Department of Human Settlements and Urban Development, Department of Transportation-Civil Aviation Authority of the Philippines, Department of Health-Food and Drug Administration, and Department of Public Works and Highway-National Building Official. 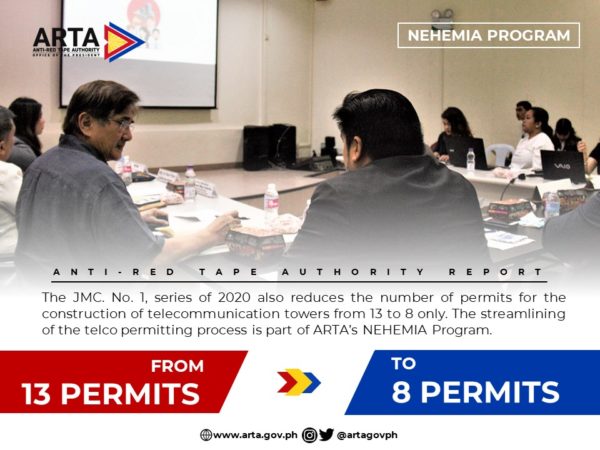 The JMC cut the processing time of application from an average of eight months to approximately 16 days across different NGAs and LGUs. In addition, the number of documentary requirements has been reduced from 86 to just 35.

Under Section 15 of Republic Act No. 11032 or the Ease of Doing Business and Government Service Delivery Act of 2018, NGAs and LGUs are given seven working days to process telco tower construction permits. Failure to act within the processing time subjects complete applications, in terms of submission, to be automatically approved by law. Furthermore, all involved employees, including the head of the concerned office or department, faces a possible six-month suspension, for the first offense, and a penalty of dismissal and imprisonment, for the second offense.