Home » Ideas » Pinays Cashing in on Jollibee Craze in Edmonton, Earning $15/h to Wait in Line

With Jollibee branches being so few in the US and Canada but the food bringing Pinoys a taste of home, a lot of overseas Filipino workers (OFWs) readily drive many hours just to find a store and order the famous Chickenjoy!

Being the first Jollibee in Alberta, Canada, the branch at Edmonton has been seeing droves of Filipinos for many weeks since it opened last August 13. The lines are so long that many have to wait several hours just to get their orders.

Considering that many of them had already driven many hours to reach the place, it is understandable that they would wish to get their order in just a few minutes after arriving in Edmonton.

Seeing that the demand for Jollibee is high, two Pinays are now cashing in on the Jollibee craze in Edmonton as they offered to wait in line for a fee of $15 per hour. It started as a joke but the two would soon get customers in Filipinos who didn’t mind paying the convenience fee as long as they get a taste of their favorite Jollibee Chickenjoy.

Both 19 years old, Maryelle Gana and Ivana Recinos have offered their services on Facebook Marketplace. They both admitted that the business idea started out as a joke.

“I was like … what if we advertised that we’ll stand in line for people for Jollibee. Then I thought about it and this sounds like a pretty decent idea,” Gana shared.

“A lot of people have been like, ‘Are you serious?’ A lot of our friends really thought we were joking. But no, we’re really serious.” 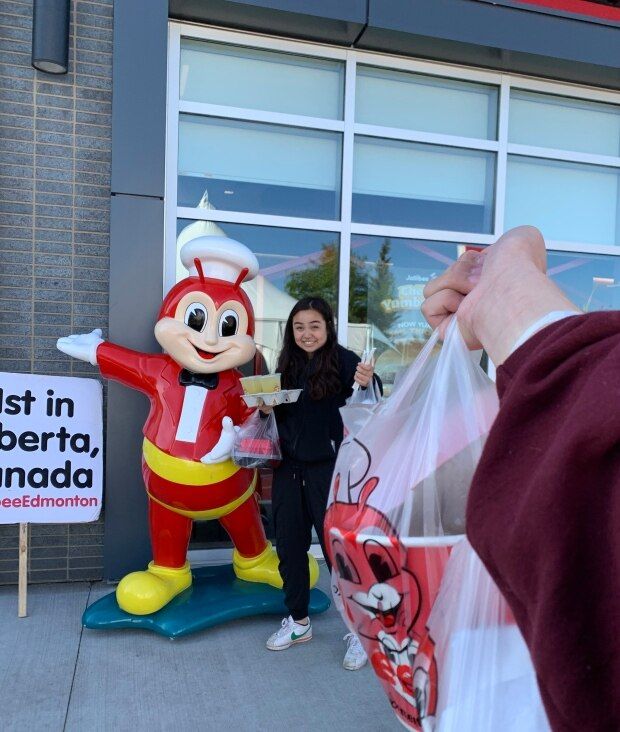 Since they were broke and trying to save up some money for a trip to Calgary, the two decided to make the joke a reality – and their business idea is actually giving them some good cash. They charge an additional $6 for those who want to have their food delivered, yet many Pinoys were willing to pay them extra.

“This is like their little taste of home and … I guess they still want it but they don’t want to wait in line for hours, so we’re just doing that for them,” Recinos explained.

The two had a generous first customer, Deniel Pascua, who paid them ‘a bit more’ than their published rate of $15/hour.

“I miss it a lot, it’s a pretty big deal in the Philippines, but having it in Alberta, the lineups are just super crazy. I haven’t had time to lineup and get everything myself. I just miss the taste of it, honestly,” Pascua admitted.

He’s not the only one. The two Pinays got several more orders over the next few days, including from people living as far as Calgary or Redwater, located about 60 kilometers away.

But while the business appears to be kicking off, the two said they are not planning on doing this full time. Their business was just meant to ride on the Jollibee craze in Edmonton and for them to have fun; they won’t be doing this anymore after Friday.

Despite the short-lived business, this does sound like a great business idea, huh?

Unlike in the Philippines where you can find several Jollibee outlets in the bigger cities, there are only a handful of stores in Canada.

The first one opened in Winnipeg, Manitoba in 2016. Two stores opened in Toronto in 2018; in Mississauga and in Scarborough.

It was only in August 2019 that the fourth one was opened in Edmonton, Alberta. Another one is expected to be opened in Calgary, Alberta within the year.